A chest owned by Brian Aherne a famous movie actor 1930-1950 bought when he got back from his honeymoon in Europe from a noted NY antique dealer Fredrick P. Victoria’s shop.
See article about the NY historic Antique Gallery google Fredrick P. Victoria’s/Architectural digest
New Yorkers treasure family-owned antiques shops, especially now, as their numbers diminish. The quirky dealers become lifelong friends; their shops offer a peaceful refuge in a hectic city.
Established in 1933, Frederick P. Victoria Son, a Manhattan gallery specializing in 18th-century French antiques, did not change its name after its founder’s death in 1980. Frederick P. Victoria’s son, Tony, took over and successfully ran the business in his father’s East 55th Street gallery for nearly 20 years. There, on any given day, you might bump into top decorators like Thomas Fleming, Sister Parish, Anthony Hail, Thomas Britt, Mario Buatta and Geoffrey Bradfield. If you were lucky, you could visit the top floor and admire an assemblage of 200-odd antique chairs, hanging from the ceiling in mad profusion. In 1999, after receiving an offer for his five-story building he couldn’t refuse, Tony Victoria sold it, auctioned off most of its contents and moved to Bridgehampton, New York. There he opened Chez Soi, a shop dealing in a whole different range of styles, including English Arts and Crafts, Art Nouveau, Vienna Secessionist and modern.
All those loyal, longtime city customers who missed Frederick P. Victoria Son will be pleased to learn that the gallery is back in Manhattan. The new shop, under the same name as the original, opens in mid-June at the Fine Arts Building at 232 East 59th Street. At the to-the-trade showroom, Tony’s son, Freddy, will oversee a two-pronged operation—selling his father’s antiques and taking orders from interior designers to construct custom-made pieces from the Victoria Design Library, which has approximately 1,800 drawings from the family’s design archive.
“From 1940 through the 1960s my father employed a very gifted, full-time draftsman, whose sole job was to generate full-size plans of every unusual antique that came through the doors,” Tony Victoria explains. “Sometimes he would have the draftsman create variations, either in size or function, to fit a client’s specific needs. The draftsman also drew up my dad’s original designs. The plans contain every detail required to make a piece.”
The drawings encompass styles from Georgian to Louis XV, Art Déco to 1950s modern, and among the exclusive customers who tapped into the extensive collection was Jacqueline Kennedy, who ordered furniture for the family compound in Hyannis. “Some of the blueprints have the names of the clients on them, be they designers like Billy Baldwin, Michael Taylor, Mark Hampton and Valerian Rybar, or individuals like Brooke Astor, Doris Duke, Grace Kelly and Jock Whitney,” Tony Victoria says. There is, for example, a stunning wall lantern that was made for Sir Ronald Tree and a mirrored bench made for Elsie de Wolfe.
Designers can also order variations on some of the more distinctive pieces sold by the shop long ago, including a red-lacquered Chinese Chippendale étagère with raised chinoiserie decoration, which was purchased by the Duke and Duchess of Windsor for their house in the Bois de Boulogne, on the western edge of Paris. “I wanted to find a way to commercialize these drawings, which have been in storage for decades. Three floors of the old building on 55th Street were devoted to the reproduction effort,” he continues. 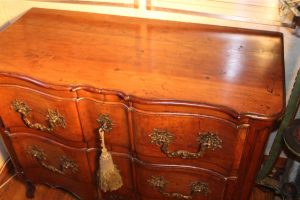 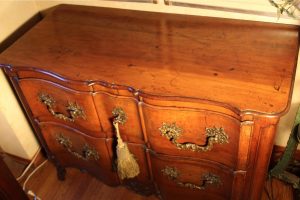 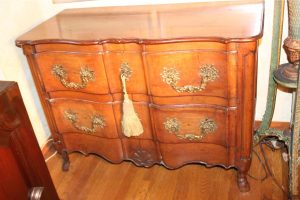 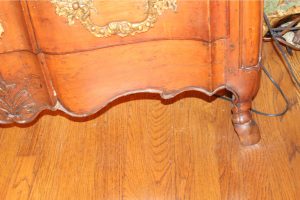 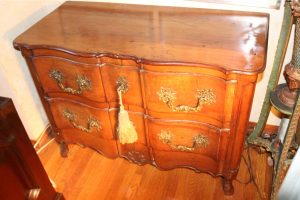 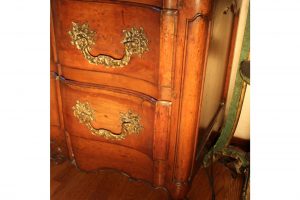 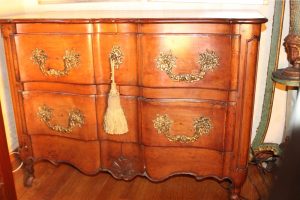